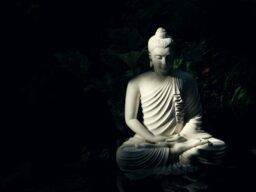 The Four Noble Truths are common name of the Buddha’s first teaching after enlightenment. When the Indian prince, Siddhartha Gautama, (circa 563-483 BCE) sat under the Bodhi Tree in Bodh Gaya, India, he swore to not get up until he reached Enlightenment. He said, “Here on this seat my body may shrivel up, my skin, my bones, my flesh may dissolve, but my body will not move from this seat until I have attained Enlightenment, so difficult to obtain in the course of many kalpas.” (A kalpa is 4320 million human years—so we see he was seriously determined.)

Having accomplished full awakening and liberation from suffering, he later spoke at Deer Park in Sarnath, south of modern-day Nepal.

The teaching he gave is known as the Dhammacakkappavattana Sutra which means, ‘The Setting in Motion of the Wheel of Dharma.’ It contains a discourse called the Four Noble Truths.

In this class, you’ll learn each of The Four Noble Truths and their meaning.

Together they form the core of the entire path of Buddhism.